Which one will kill you first ?! 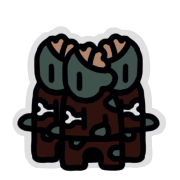 Discover the concepts of our game “Community Vs Zombie”, its universe, the game mechanics as well as a development roadmap

In a distant universe exist a gigantic cube floating in space.
If nobody knows exactly who or what build it in the first place or what was its original purpose, it has been exploited trough the millenniums by various people for very different uses.

What we are sure about is that whoever control the core of the cube, its control chamber, have access to its amazing potential.

The cube is a multidimensional space divided in a multiple of small chambers. The quantity and size of those chambers is controlled by the cube master and almost nobody in the universe knows precisely how much control the master has on those chambers but it is common knowledge that inside them, climate, time, landscape or any law of physics might be altered.

It now has been use for the last 150 years to host the very famous reality show “Galactic Survival Games” with a simple concept : put a group of people in the middle of a zombie infested chamber and see if they can survive for a month.

They quickly came up with a point system to reward participants depending on their actions to push them to… a more dynamic behavior.
Survivors started to become galactic superstar and went from despair to wealth and fame. Other got the taste of it and started participating for the sport. Most died or got lifetime traumas.

Soon sponsors started to invest on some popular contestant giving them unfair advantages over their teammates and soon it was the n1 entertainment to watch on galactic cable.

The reward : death or glory!

And today is your luck…

…You have been selected !

I am not going to put down all the game mechanics here but here are some of the main ones :